Zaid had his first seizure at 10 months old. His Mum, Sophie, shares their family's story. 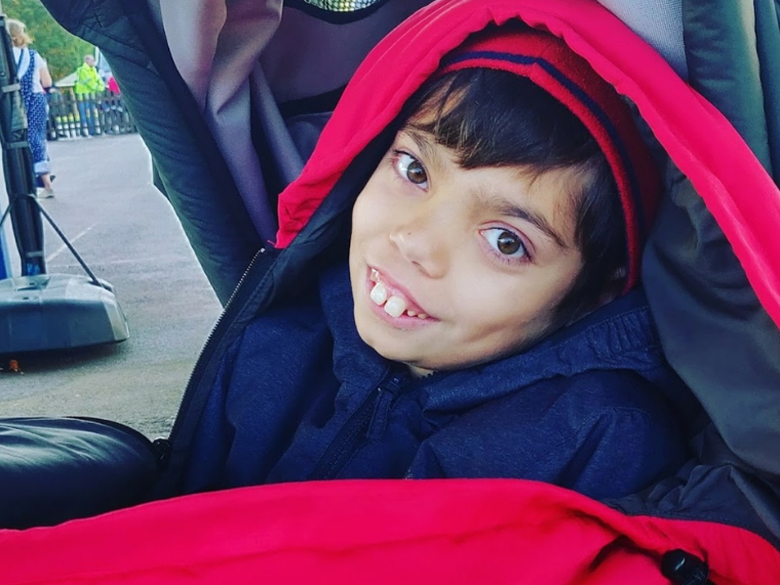 The first time that Zaid had a seizure was when he was ten months old and had just moved into his own bedroom. He didn’t wake up for his 3am milk feed, however I naturally woke up ready to breast feed. I went to his room to check on him only to find Zaid not breathing, face blue and his whole body floppy. Of course I panicked and shouted at my husband to wake up. Watching my husband rock Zaid in his arms, praying to Allah, while I was waiting for the ambulance to arrive was so surreal. It felt like the whole situation went on for hours, when in reality it was minutes.

Zaid's second seizure was when he contracted a chest infection. This time he was in hospital for two months.

Even when we finally got him home, we spent months after working to build his strength, teaching him to walk again, helping him find his balance and to put on weight. It felt like an endless struggle.

The seizures continued unabated for four months with each ending up with an emergency visit to A&E and each time he was given a diagnosis of febrile seizures. He began to experience absences and whilst staying with my parents he fell ill, resulting in a trip to a different GP who quickly advised that a baby so young should not be having such a high volume of febrile convulsions. The recommendation was to return to our GP with Zaid and demand to see a specialist, which we did.

Initially, medical professionals thought Zaid was showing signs of childhood epilepsy and only at that stage was he referred to a Neurologist Paediatrician at Leicester Royal Infirmary. He took one look at Zaid’s notes, said he suspected Dravet Syndrome and asked if we would be prepared to have blood tested to confirm his suspicions. The blood test results came back positive, showing a mutation of SCN1A.

When Zaid was diagnosed I got in touch with DSUK and joined the private Facebook Forum. Before that, my husband and I felt very lonely and we didn’t know who to turn to. Joining the Facebook Forum made me feel strong for my child, as finally I could talk to people who were going through the same situation. I learnt so much about the illness and what to ask consultants at appointments. The forum helped me pull myself out of the shock I was living with, not knowing what and how to look after my ill first-born son.

The charity has funded equipment for Zaid, given us access to conferences and helped my family to network with professionals and families from all over country. The Center Parcs weekends have been the best little holidays for my whole family to enjoy without stress. Having DSUK by our side has helped me as a mother to become strong and fight for every service Zaid needs. I see all of the families on the Facebook Forum as extended family!

How Zaid’s seizures have changed as he’s got older

Looking back on his younger years, Zaid had it hard. Endless hospital stays, always really ill in the winter months, having hundreds of absences every day. Now, he may have the odd few in a day. He is easier to look after now - I never completely relax, but I do know I'm not on red alert mode all the time now.

As Zaid has got older and is eating better and has built better immunity and adjusted meds, his seizure activity has definitely reduced.

Last time Zaid had to stay in hospital was four years ago. Any seizures he has now, I deal with at home, no need to call paramedics. We haven’t had any hospital emergencies for years. The seizures he tends to have are tonic clonics or focals. He can have whole spectrum, but these two mostly come to play.

Zaid can have four or five months of freedom from seizures. Another achievement of the past three years, is that Zaid can be in a paddling pool where the water is not that warm and he can stay in water for hours. This is new ground for us because cold water was one of his seizure triggers.

Recently he has had four seizures in a month, which is rare. I'm not sure what triggered them as he has not been ill or had a high temperature; it could be hormones. The most freedom he has had from seizures has been ten months. 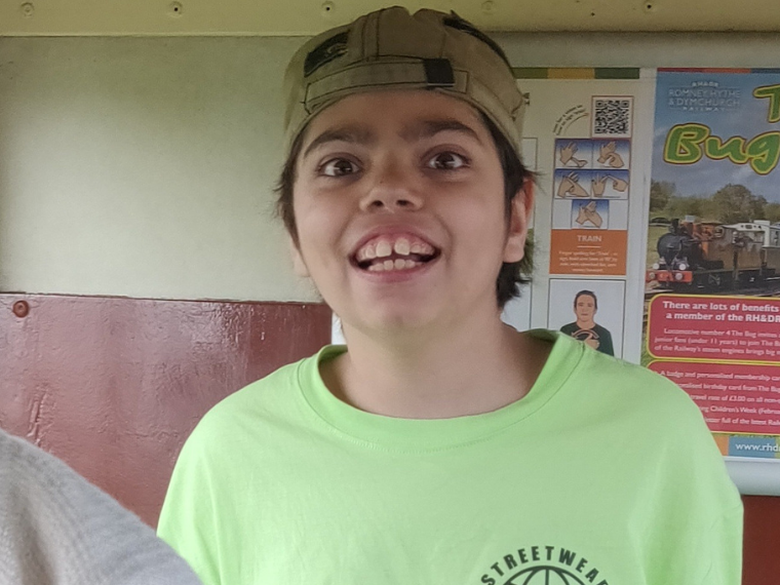 Zaid is on the autistic spectrum and has severe learning disabilities, he can't read or write, he is not toilet trained and he can't dress himself. He won't walk long distances, so we need a pushchair for him and he can get very anxious. He goes to the best special needs school in Coventry, we are lucky!

He has been hard to handle with behaviour recently, really ever since schools opened back up from lockdown. He would swear a lot and other challenging issues.

He is now in year 10 at school, he is speaking more, learning new words and has five short sentences. We have still not had a conversation with him but he is easier to understand and he has his own way of letting us know what he wants.

He can stay awake all day at school, which is new, as he was always asleep at some point in the primary school years. He understands everything you say to him, he can blank you and he has rolled his eyes in a typical teenager action.

He is glued to his iPad and constantly has volume at full loudness, which can drive you potty. He is more demanding and wants to try and control any element of the day.

He still won't sleep at night without you in bed with him - that's never changed. If we are walking and he suddenly decides that he doesn't want to, I can't pick him up anymore, so you end up having to convince him to get up and walk to the car or house, guiding him the whole way.

Zaid’s behaviour can be a challenge, but overall, he is the most loving, happy-go-lucky, cheeky, young man. He loves his sister and likes to be in company. When he was younger, he would prefer to be in his room alone.

He still likes to be cuddled like a youngster does and he gives complete love and attention to you. I hope Zaid's seizures stay fairly controlled as he goes through teenage life and he carries on progressing his speech. I would love to hold a conversation with him.

Talk to us all on the DSUK Facebook Forum and meet other families. Embrace the warmth this amazing group gives you; hope, strength, education, and information. Don’t keep yourselves isolated and don’t bury your head in the sand pretending everything is fine, because your loved one needs you to fight for every need.

I have learnt to be pushy, to chase up reports or people to get the resources Zaid needs. We see the community paediatric doctor once a year now and she is slowly getting us ready for adult care.

After I gave birth to Zaid, I didn't go back to work and became a stay at home mum. But two and half years ago, I set up my own business. I work from home so I can deal with the children and run a small business. I never thought I would be able to hold a job, due to Zaid’s needs, but being my own boss means I choose my hours and I'm doing something I'm passionate about!

Zaid has four years left of school and after that I'm not sure what's in store for him. This is unknown territory for us. He will stay home with us - he is not independent - so one important thing I know I will need to arrange is deputyship (power of attorney), so I can still make decisions about his care and finances. All I can say is watch this space!